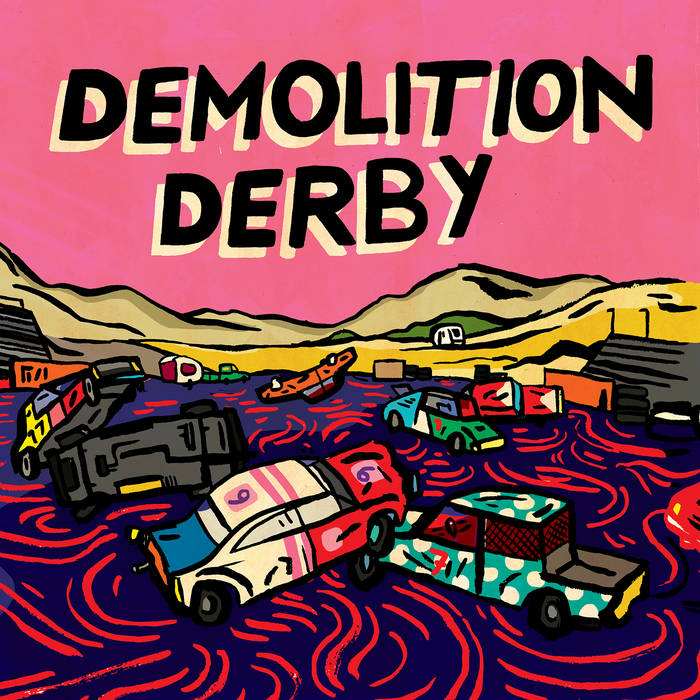 “Matador” was the first song I wrote that ended on the collection that was to be called Demolition Derby, in the faraway summer of 2018. Listening to it now, I realize a lot of the subjects that permeate the whole album were already there: artificial landscapes, dealing with the passage of time, self-delusions and disappointments and, finally, an attempt at being okay with a certain degree of inner turmoil: “make your peace with whatever you feel”, goes the chorus.

Demolition Derby is a weird choice of name, seeing as there are no such events in or near Portugal, where this band is from. But other than my being a sucker for alliteration, there was something in the imagery of cars wrecking cars, the sheer nonsense and waste of it all, that resonated with a quarter life crisis of sorts I was going through, as well as with an ongoing sadness at the climate emergency and the flabbergasting amounts of useless objects that are produced, sold and discarded every single day in spite of it.

This is the fourth full-length album in Minta & The Brook Trout’s history. It’s the one with the smaller number of songs in it, and the one with the longest songs we ever played. It’s the one with the least acoustic guitars and the most keyboards, the first without a single ukulele strum. It has a lot of stuff that made it to the final version all the way from my home demos, so I do love the fact that “demo” is part of its title. Everyone in the band sings in it, and everything you hear was recorded by the four people in the band: me, Francisca Cortesão (vox and guitars, some keyboards and percussion), Mariana Ricardo, who produced the record with me, for the fourth time in a row (bass, some other stringed instruments, synths, percussion, vox and the music to “International Loss Adjusting”), Margarida Campelo (piano, both electric and acoustic, synth, vox) and Tomás Sousa (drums, percussion and vox). We recorded Demolition Derby with our longtime collaborator Nelson Carvalho, who also mixed it. JJ Golden (of Golden Mastering, in Ventura, CA), who we reached out to knowing his work from Little Joy’s self-titled album, among other gems, mastered. Bernardo P. Carvalho, whose illustrations I’ve been a fan of for the longest time did the artwork, which is almost like a miniature graphic novel.

We usually take a long time between releases – our previous record wasn’t named Slow for nothing! –, mostly because we take a long time making sure we’re happy with how everything sounds and looks before sending it out to the world. Demolition Derby was no exception.

I hope you enjoy it.